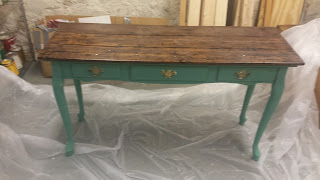 At pickup, the seller let me know that the table only had 1 drawer, an immediate downer.  I was already in love so I bought it anyway.  When I brought it home, my boyfriend went into "super critical mode" and declared that he hated the wooden table top because of the small army of poorly placed screws.  After a small spat, we agreed that the table top and terrible hardware would have to be changed.

Once I decided that the living room color scheme was going to be blue, gray, and white, I realized that the teal (my favorite part of the table) would have to go.  I already had some gray paint that I didn't end up using for another project, so we went with that.  Next we set to work deconstructing the table.  We started with the 7 million screws in the desk top.  I was able to get out most of them with a manual screw driver and a drill.  My boyfriend removed a few remaining ones with some "special" drill techniques.  And for the 2 or 3 that we stripped or that were buried too deep, we were able to rip off the boards despite their presence.  I used a putty knife to pry off the fake drawer fronts.  We then used a jigsaw to cut out the inserts for the new drawers, slightly smaller than the drawer fronts.  We screwed together a few leftover pieces of wood to make small drawers and glued the drawer fronts to them.  Here it is in various stages of deconstruction: 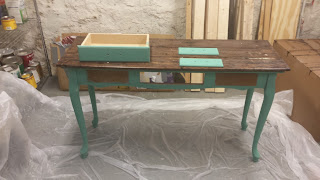 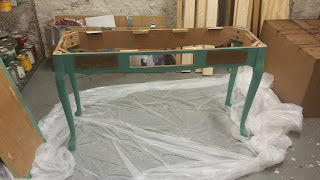 Next we set to work on the new table top.  While I had hoped to salvage the original boards, they were simply destroyed.  So back to Home Depot.  This time I got some nice poplar 5.5 inch wide by 4 feet long 1/2 thick boards ($8 apiece). 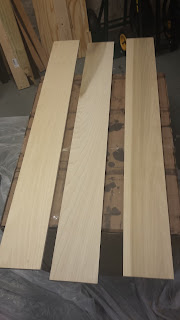 The boyfriend and I had some disagreements about what to stain the boards.  I wanted to stain them the same dark walnut as the desk, particularly since I had plenty of stain leftover.  He wanted a lighter look, even considering whitewash, which I know he hates.  We agreed on a weathered gray look.  I did have some concerns about the contrast between the boards and the gray table, so I did a layer of whitewash as well.

I looked at several tutorial on Pinterest before decided on a stain and technique.  This one from AKA Design came the closest to what I was looking for but these other tutorials from Owen's Olivia and Ella Claire had some great suggestions as well.  Ace Hardware only had Miniwax Classic Gray in stock.  I wiped a small amount on the boards with a towel and it was super easy and already looked great.  I wanted a bit more depth as well as contrast, so I did a layer of whitewash as well.  I mixed 1 part white paint and 2 parts water and wiped it on with a towel.  It dried very quickly so I only used a little at a time, as suggested by Owen's Olivia above.  I then sealed it with the same Miniwax Low Gloss Stain wiped on, also used on the desk.  It really makes the surface smooth without too much gloss or change in the color.  Here are some pictures of the process: 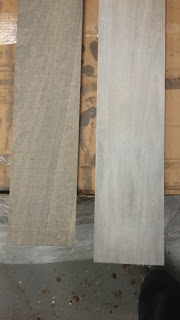 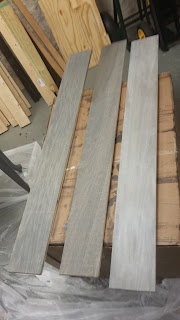 All three boards with stain and whitewash 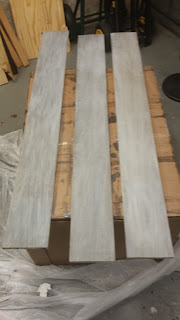 We reattached the original tabletop (upside down so that the crown would rise up and out to meet the boards and screwed in the boards from underneath.  The boyfriend had a real problem with any screws showing on our fabulous new desktop, but I felt that a few symmetric screws would be ok.  He won this round though.  I sanded the corners and edges after the boards were attached.  Here are a few close ups. 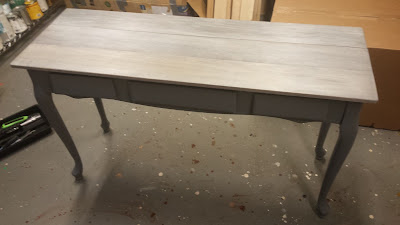 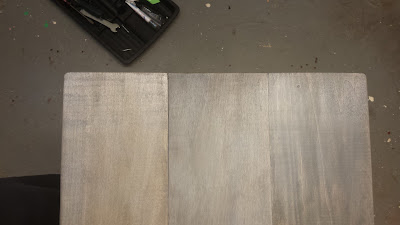 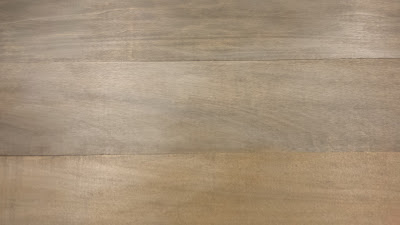 Finally, the pulls.  I found some decent ones on Amazon for a great price that came with screws of different links.  I might replace them with some patterned blue ones after some searching at Anthropologie.  Any floral ones were immediately vetoed by someone else in the home.  The boyfriend screwed them on while I was at work.  Pretty good for our first furniture buy for the next house.  Voila! 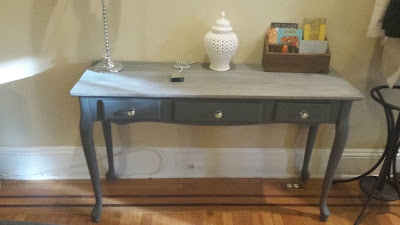 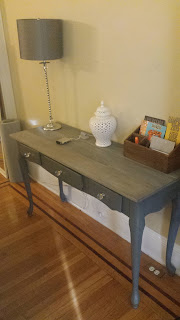 A close up of the pulls 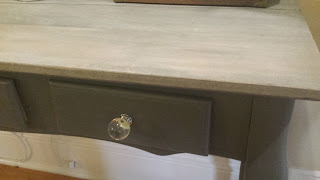 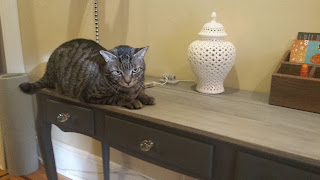 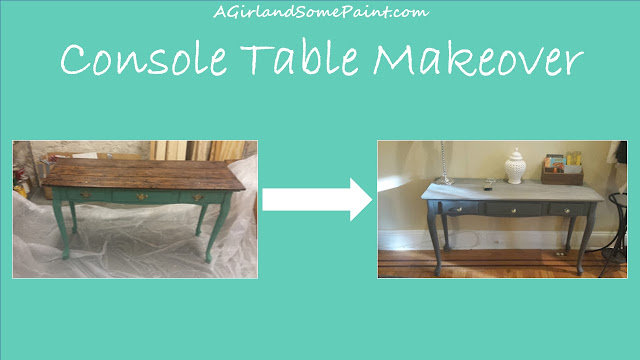