So I've got a slew of projects I'm almost ready to share, thanks to the new "Project House" we're renting.  I'm really trying to post things more regularly as I complete both small and big projects and I'm definitely keeping you updated on Instagram more regularly than the blog, if you want to follow me there @agirlandsomepaint

Anyway, I've been doing day in/day out Zoom meetings for work while at home and I have been trying out different spaces to have these meetings.  I primarily use the kitchen nook right now as it has the best overhead lighting and I just close the window blinds behind me and try to limit how much people can see of the...not so great but not terrible enough to cover wallpaper in kitchen. 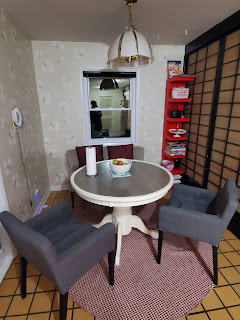 And no, that phone does not work (I think) and I do plan to remove it and I do have a plan for this space, with white bookshelves flanking the settee to block some of the wallpaper and a curtain, but it's not a priority space.

I also have my basement office which I use when I need extra privacy for work.  That space is still coming together and I have a cardboard backdrop that I occasionally use for the space when needed, that will need to be...prettified.  And it's cold down there and far away so I prefer using the upstairs space for more informal work meetings and less intense work.

Before I was using the kitchen nook and the basement, I was using the guest room/office/workout space when we first moved in.  It had terrible overhead lighting that created a lighting "halo" that made me really hard to see and was distracting.  And...its the room with the cork wall backdrop, the ugliest thing I've ever seen.  I have a plan for THAT, but it's not ready yet, but I decided to go ahead and tackle the lighting issues.  Our new roommate was also using this room a lot for his workouts and online classes, so I figured this would be a nice upgrade for him too. 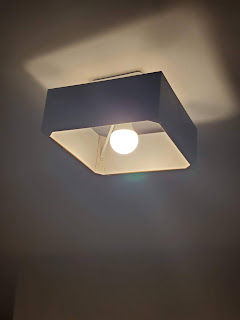 I don't really understand the point of this light's "box".  It was ugly, not functional, and did nothing for the lighting.  The naked bulb would've been an improvement, except the halo effect was still present in my Zoom meetings.

I Immediately found the right size lampshade at Home Goods and it perfectly matched some fabric I already had on hand.  I cut it to about a half inch overhang and put glue around the edge of the lampshade first and then the sides of the shade and folded up the fabric. 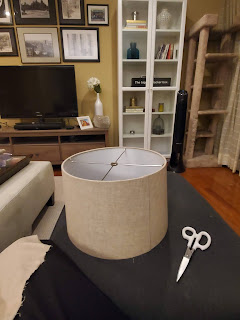 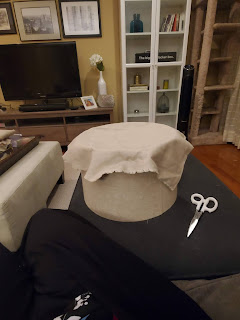 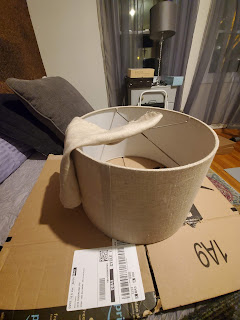 However, my shade didn't have a fabric edging like YHL's did and I couldn't glue it to the inside, so I had to figure out a creative way to cover the extra fabric that would look good with the fabric and cover the glue.

First, I tried cheap white ribbon.  The glue showed through immediately.  A second layer of ribbon looked even worse.  The hubby gave his usual immediate negative feedback when I was trying to hang it up with him, and I was done with that.

Next, I tried wasi tape.  I had a ton leftover from my mirror project (link here) and decided to try some really pretty copper tape that looked great again the fabric.  It stayed put nicely and covered up the glue just fine.  I did a couple of levels and then used a thin strip of the tap to do a little detail work at the middle and top.  The hubs and our new roommate both thought it looked great. 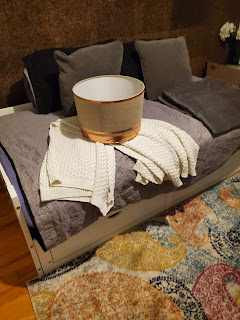 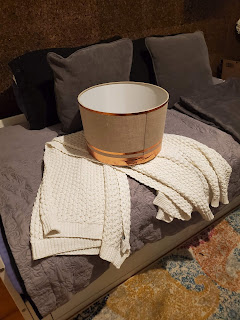 Next, I had to try to hang it up.  The lampshade was truly meant for a lamp, not a ceiling, and had metal bracing around the bottom side, which meant I had to glue fabric on that side of the shade because it wouldn't fit around the bulb.  I tied fishing line to the bracing and then made a loop to the bracing on the same side of the shade, so that I have two loops.  Then I just shortened the loops until the lamp was the right height to cover up the white holder for the last shade and looped them around the holder.  Secure, removable, and the perfect height.  The lampshade is so big that the fabric has plenty of room between it and the bulb and shouldn't get too hot. 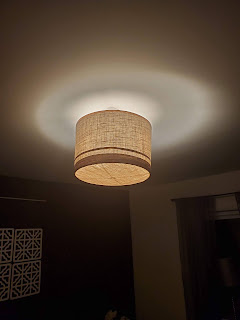 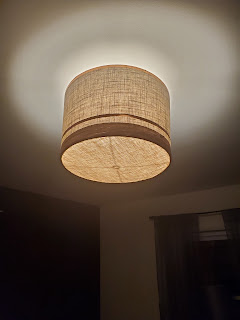 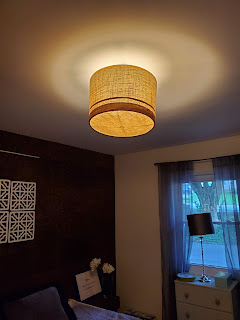 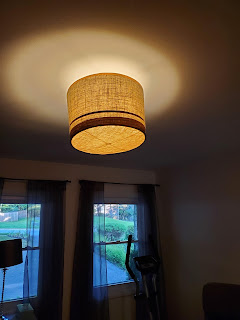 I'm considering either thicker white ribbon or white tape, but I'm loving the look for now.  Although I'm not sure I love how it looks at night yet.  Anyway, the actual point is that the overhead lighting is now much better.  The hubs thinks its mood(y) lighting, but you can turn on the other two lamps in the room if you need more light and the room has two large windows as well, which make bright enough to work in during the day but pleasant enough to just hang out with the overhead light on after dark.  I no longer look like a fuzzy distracting angel in my Zoom meetings.

Anyhow, I'll try to keep it coming with the projects somewhat regular for a little while.  But the gram makes it so easy...